Prof. Jan Madey is an outstanding specialist in software engineering. Still, he considers his most notable achievement to be the success of students from the University of Warsaw who won medals in the world's most prestigious competition – ICPC International Collegiate Programming Contest. Thanks to the creation of a unique system of identifying talents and working with them, the University of Warsaw is the only university in the world that has been continuously qualifying for the ICPC finals since 1994, winning five gold, six silver, and four bronze medals in them, winning in 2003 and 2007 and taking 2nd place in 2012 and 2017 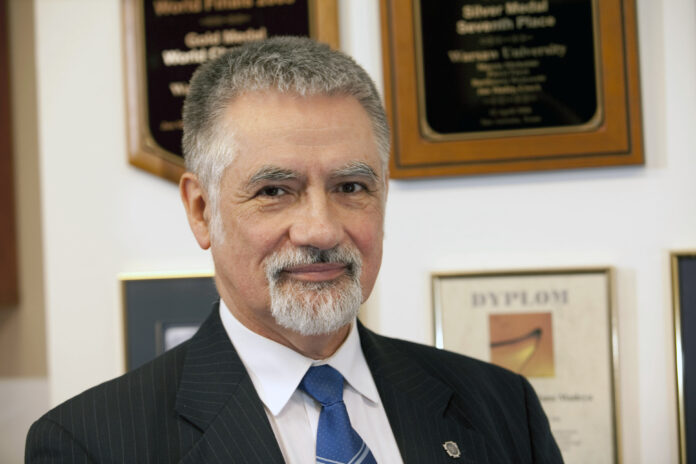 In the fall of 1994, one of the former UW employees sent an e-mail to one of his friends from the UW that ICPC regional qualifiers were organized in Ghent. Prof. Madey was the only one who could quickly assemble a team that could participate in them without special preparation. As there was little time, he sent information about the competition to his pupils from the Polish Children’s Fund (PCF), under which he had been operating since 1983 and took care of exceptionally talented children from primary and secondary schools, including those with IT skills. Three volunteers were quickly found, and although there was practically no time for preparation, prof. Madey counted on the students not failing him. It was because he had had computer science classes with them many times at the science camps organized by PCF, and he knew they were worth a lot. The results, however, exceeded all expectations. The team from the UW won the competition, obtaining the right to start in the 6th edition of ICPC finals, which took place six months later in Nashville (USA). Although they did not win a medal (11th-18th place), the first step was taken. Prof. Madey understood then that this was an excellent opportunity for the UW, but only if the subject was approached more systemically. Next year the first edition of the ICPC Polish Collegiate Programming Contest (PCPC) started, organized by the Poznan University of Technology and then mainly by the UW, which was taken care of by his former student and good friend, prof. Krzysztof Diks.

Similarly to programming competitions organized by prof. Madey for High School Students, transformed in 1994 into the Olympiad in Informatics (OI). To its Main Committee, prof. Madey recommended prof. Diksa, who soon became its chairman. The catching of IT talents among OI participants and then polishing them as part of the PCF led to the fact that most of them began to study at the UW, creating more and more solid teams for ICPC. In 1998 prof. Diks became a co-coach of the UW representation at ICPC. They also divided responsibilities among themselves. Now, prof. Diks was responsible for training, and prof. Madey for the financing and logistics of trips to the competition and their promotion in Poland and abroad, in which he turned out to be the undisputed master. Because he was also able to take appropriate care of the finalists, being a driver, sponsor, father, and guide, UW didn’t have to wait for their successes. He won his first bronze medal at the University of Warsaw in 1998 for 9th place, the first silver medal in 2001 for 6th place, and the first gold medal in 2003 by winning the competition. This success was repeated in 2007, and in 2012 and 2017, UW was placed second twice. In total, the UW has won five gold, six silver, and four bronze medals to date. More importantly, it was the only university in the world to advance to the ICPC finals every year from its first start in the regional qualifiers in 1994. Such a high level is possible because the participants of the previous ICPC finals began to join the training process. There were quite a few during the 27 years of UW participation in the competition.

Name of prof. Madey has been very well known in ICPC circles for years. Although during the ICPC finals in Porto in 2019, he officially announced that he was resigning from the position of the team’s coach after 25 years of serving it, handing it over to prof. Diks, prof. Bill Poucher, president of the ICPC Foundation, during the presentation of the UW team during the last ICPC finals in 2021, said it hails from “Madey University,” for which he received loud applause. It is also proof of recognition for the ICPC 2012 finals, which took place in Warsaw and for which prof. Madey, together with prof. Diks and Rafał Sikorski, president of the Foundation of Information Technology Development, were responsible. According to the ICPC Foundation, it was the best-organized competition in the history of ICPC.

Of course, all this attracts many people who want to study IT at the University of Warsaw. Suffice it to say that after the ICPC 2003 finals, when the University of Warsaw won it for the first time, the number of candidates for 1st place at the Faculty of Mathematics, Informatics and Mechanics of the University of Warsaw increased from 3 to 40! And since most of them want to participate in ICPC, it was necessary to start organizing internal faculty eliminations from a certain point. In the last, in 2021, 21 teams of three participated, and this is a total of 63 people. Not surprisingly, the 2003 and 2007 ICPC champions said their hardest part was to beat their PCPC teammates on their way to the championship, and they didn’t always do so.

Jan Madey is not only an animator of the academic movement related to participation in programming competitions. He is primarily an IT specialist, academic lecturer, professor of technical sciences, and social activist. Throughout his professional life associated with the University of Warsaw – from defending his master’s degree in mathematics (specializing in numerical methods) in 1964, through an assistant, assistant professor, and associate professor, to full professor at the Institute of Informatics (where he was a director from 1984 to 1996). From 1993 to 1996, he was the vice-dean of the Faculty of Mathematics, Informatics, and Mechanics of the University of Warsaw. From 1996 to 2002, he was the vice-rector of the UW. He obtained the academic degrees of the doctorate (1972), habilitated doctor (1979), and professor of technical sciences (2001) at the same university, all in computer science, of course.

He has always been attracted to the practical aspects of computer science. Initially, he dealt with numerical methods and programming languages, then operating systems, and when software engineering was born, he turned to it in a completely natural way. His interests and research directions were also greatly influenced by the meeting of many outstanding global computer scientists, incl. F.L. Bauer, O-J. Dahl, E.W. Dijkstra, C.A.R. Hoare, P. Naur, and N. Wirth.

As a lecturer and researcher, Madey spent almost ten years in research centers in Europe and North America, including London University, Technical University of Munich, and the University of California. His interests included the development of methods and tools supporting formal documentation of computer systems and methodology and tools supporting the construction of correct software. In his opinion, you should first have a set and documented requirements specification in developing software.

– It should be checked so that before starting the software development, you can be sure that it describes what is needed and expected by the client. The software development process should also be carried out systematically, with the possibility of verifying, and not just testing, various phases of the code being created. It is also essential to consider modifying and extending the code as needs arise – says prof. Madey.

He was also the author of the first Polish textbooks for learning programming languages, ​​Algol 60 and Pascal, and the author of the methodology of teaching them. He published his works in such journals as IEEE Transactions on Software Engineering, Bio-Algorithms and Med-Systems, Information Processing Letters, and Software – Practice and Experience. He also held numerous scientific, social, and advisory functions, including vice-chairman of the General Council for Science and Higher Education, member of the Informatization Council under the Prime Minister’s Office, chairman of the Specialist Team for IT Infrastructure, chairman of the Council for Informatization of Education, member of Department IV – Of Technical Sciences, the IT Committee of the Polish Academy of Sciences, as well as the chairman of the board of the Polish Children’s Fund, the chairman of the Polish Society of Multiple Sclerosis and a member of the Engineering Academy in Poland.

In 2001, President Aleksander Kwaśniewski awarded him with the Officer’s Cross of the Order of Polonia Restituta. In 2011, by the decision of President Bronisław Komorowski, he was awarded the Commander’s Cross of the Order of Polonia Restituta. A year earlier, in 2010, he was awarded the Polish Academy of Sciences Nicolaus Copernicus medal, and in 2017 the Special Award of Jan Wejchert of the Polish Business Roundtable. He was honored with the Medal of the National Education Commission as well. He is the laureate of the Marek Car and Info Star awards. In 2018, he was awarded the Medal of the 70th Anniversary of Polish Information Technology by the jury of the Polish Information Technology Society.

You can read more about the professional careers of the ICPC world champions from Poland here: https://hub.landofitmasters.pl/pl/category/ludzie/