The digitization of public services in Poland is 14% above the average for the analyzed countries in the region. We perform much worse regarding the level of digital skills among the general public 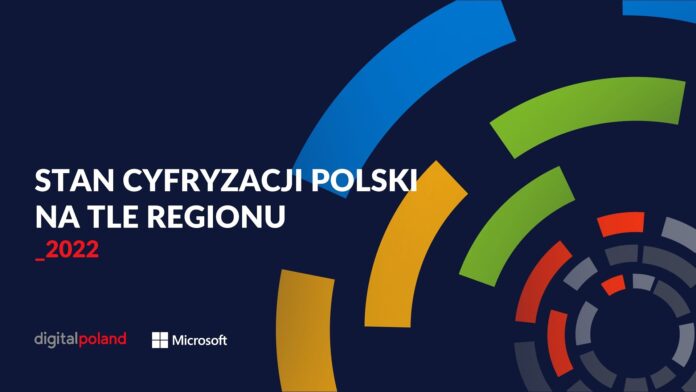 The Digital Poland Foundation and Microsoft have prepared a report showing Poland’s digitization level. The report is based on the Digital Futures Index. It provides data on the current status of digitization of the country, indicating the areas where the greatest success has been achieved but also where there is more to be done to accelerate the digital transformation process.

“The analysis shows that Poland has the potential to accelerate its pace of digital transformation. Thanks to the spirit of entrepreneurship and open society, our country can become a leader in the CEE region and an incubator of great ventures with aspirations for global growth. By supporting the development of the Polish Digital Valley, we have committed ourselves to strengthen the position of Poland, its citizens, and companies, which should make it a global player,” says Dominika Bettman, Microsoft’s General Director in Poland.

Below are the index results for Poland by category, compared to the CEE average (100 is the average).

In the business digitization category, Poland received 99 points, which is 1% below the average. Our country is much better in terms of the percentage of companies employing specialists in the field of information and communication technologies, achieving a result 35% higher than the average for Central and Eastern Europe. However, it lags slightly behind in the percentage of enterprises that buy and use cloud computing (9% below the CEE average) – strongly related to higher levels of innovation and productivity.

In the category of digitization of the public sector, Poland obtained 114 points. Going a little deeper, we can see that Poland scored 145 for the interaction of society with the state via digital technologies. In other words, digital public services are top-rated where they exist. It suggests a much greater overall demand for digital services and represents a critical digital development opportunity for the country. The main area for further development is increasing the percentage of schools with online learning platforms, so the country scored 79.

In the category of digital infrastructure, Poland obtained 101 points. Poland has achieved better results in this respect, despite a weaker position regarding fixed-line communications or bandwidth available for mobile networks. The scoring was also lowered by the scale of investments in ICT, cloud, AI, and IoT in Poland. As much as 10% below the average for the surveyed countries in the region.

In the digital economy category, Poland fared 3% below the average for the researched countries in the region. Poland exceeds the CEE average by 11% in terms of ICT exports. However, the size of the digital economy cannot be assessed. Poland is above the average for the region in terms of e-commerce (108) and consumer electronics (111). However, it is below average regarding the share of ICT professionals in total employment (93) and the contribution of the ICT sector to GDP (76).

In the human capital category, our country scored the lowest – 86. Poland achieves a result 14% lower than the average for Central and Eastern Europe in terms of the level of digital skills among the general public. Skills are most strongly correlated with higher wages, higher productivity, and sustainability efforts, so further investment in this area will have significant benefits. A key priority – and opportunity – is to increase investment in nurturing the next generation of talented engineers and addressing the current gender imbalance.

It is also worth emphasizing that the report shows the relationship between the degree of digitization of the country and economic and social development by collecting and correlating some indicators. The analyses show that more digitally advanced countries perform better in economic and social indicators. In other words, they are greener, wealthier, more innovative, and more competitive. So when discussing digital transformation, the question no longer is “if” but “how” and “how fast.”

“At the Foundation, we believe that digitization and new technologies can help solve our country’s serious problems. If, for example, we had a network of Internet of Things sensors measuring water quality, we would quickly and easily find out about the poisoning of the Odra River. Thanks to high-speed 5G network connectivity, we could better use our natural resources and control power networks, making our air cleaner. Therefore, decision-makers should intensify activities for digitization in Poland,” says Piotr Mieczkowski, managing director at the Digital Poland foundation.

The report is based on the Digital Futures Index, which shows digital development using 55 indicators from trusted public data sources. Such as the European Commission, European Investment Bank, Eurofound, UNESCO, World Bank, OECD, World Trade Organization, and the United Nations. It includes data for the countries of Central and Eastern Europe and other countries in the region (Estonia, the Czech Republic, Croatia, Greece, Romania, Russia, Poland, Hungary, Malta, Slovenia, and Serbia), aand selected countries of Western Europe. All of them, according to experts from various reports, are considered for leaders in the field of digitization.

The report “The digitization of Poland against the background of the region” debuted at the Economic Forum in Karpacz and can be downloaded from the Digital Poland Foundation website (digitalpoland.org), but only in Polish. The Foundation is the institutional partner of the event.

Previous articlePolish startup Hintech rakes in new funding to monitor podcast market
Next articleAsseco in the world’s forefront of fintech, according to IDC